There are probably 12345 perfumes out there which I could potentially fall in love with, but time, availability, Royal Mail postal restriction nonsense and money are issues that regulate the amount of scents I can possibly try. Never mind review. But it's difficult to resist ordering this set and those samples,  and in the end it's inevitable that I sometimes  lose track of what's hiding in my little Poundshop drawers. My organising system is simple enough though: 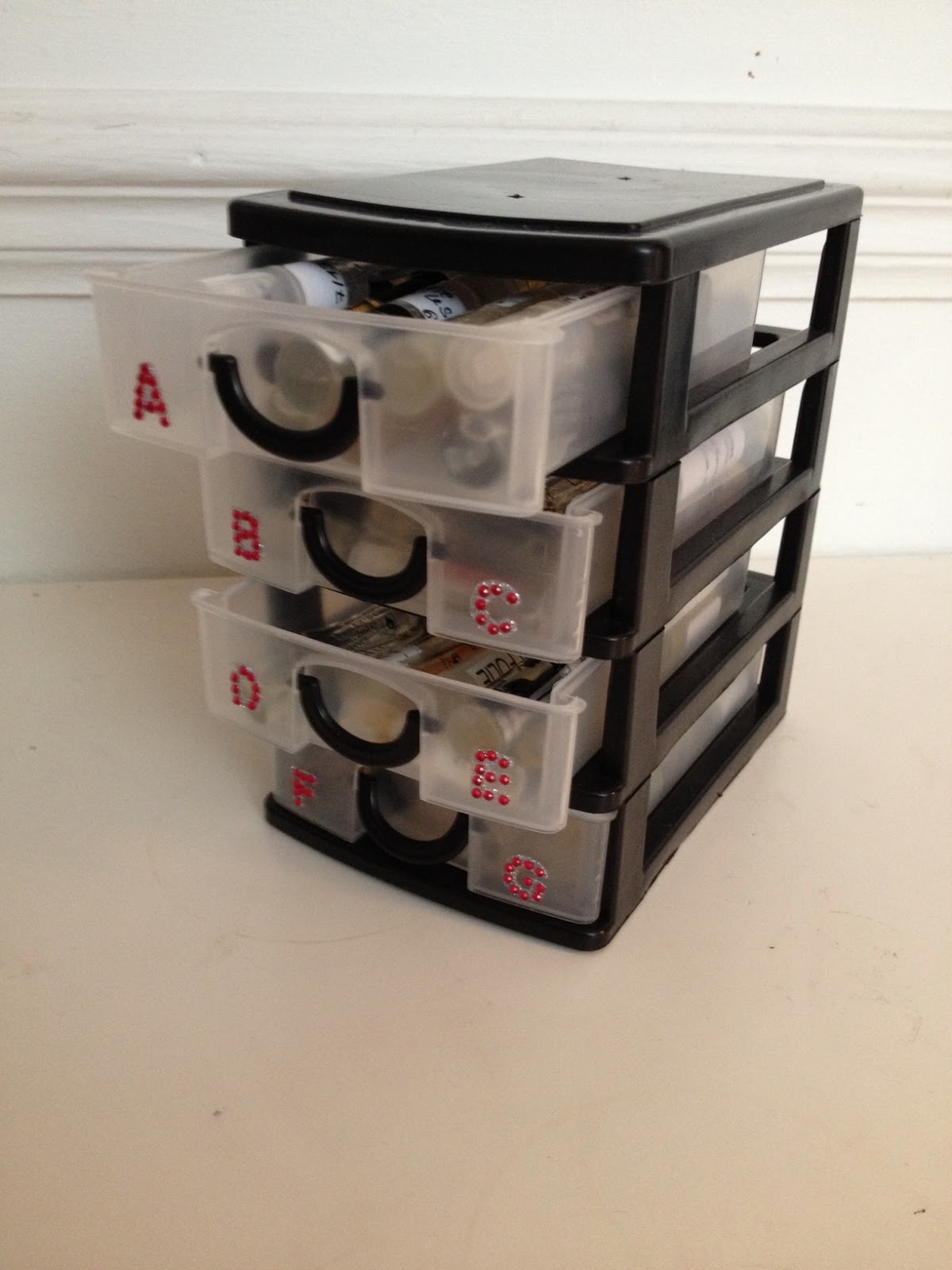 Some letters seem to attract far more little vials than others, F and G for example, are not very popular, but exploring the Hows and Whys of that is something that I leave for another post. A to Z is easy but not very helpful if you just want to try something floral/woody or hesperidy/green and have forgotten the main notes for the better half of your sample collection. So it's really handy when a perfume house is helpful and names things in a simple, matter of factly way. Like  C is for Chypre. In the second drawer from the top, labelled B and C with these slightly tacky, red glitter letter stickers from yet another Poundshop. I was in the mood for a chypre and it couldn't have been easier. Chypre by Nobile 1942 it was...

As far as I know the Italian perfume house Nobile 1942 isn't in the business of giving deliberately misleading names to their creations in the way that LeLabo do, but is this really a chypre?
Yes, it has a fresh bergamot and mandarin/orange opening, but on my skin there is very early on a pinkish bright bubblegum note that makes me smile and reminds me of the effect that Tuberose No.1 had on me. Just the right amount of that difficult note, not too overpowering, just coming to say Hello a few times during the earlier dry down. Love it! I know my skin has the tendency to wolf down the citrussy notes and whatever sweetness a perfume might possess often becomes weirdly exaggerated, but this perfume is still a bit of a surprise. A very nice one though. It's classy, just a tiny bit old school, but incredibly wearable. After about 2 hours it does get a bit closer to a traditional  chypre with the neat hovering between a fresh green and a bed of flowers, mostly roses with a patchouly hint. I would call this phase floral chypre.  It transcends into a comforting vanilla wood after a long day of wearing and I still got a whiff from time to time when I was laying in bed. Projection is not all that great, considering. M. declared it a skin scent verging on the masculine, but I strongly disagree. Yes, it does stay close to skin, but there is no doubt about it's gender. For me Chypre is a very feminine perfume. It covers the sensual and the imaginary in equal terms, but it always stays on the double x- chromosone side of things. For my visual interpretation I wanted to capture it's radiating warmth and "earthyness", no hard lines but not too ethereal. The right balance of colours  was the easy bit but to find the overall texture of the visual turned out to be really difficult. I struggled all day with it, trying out lots of things and I was close to leave it, at least for a while, when I found a solution that is close enough to my idea of the scent to publish it, but may be I will change it again in future.

And in the end I don't care what the name of this beautiful scent suggests, but I do want to know a bit more about it's story. It's dedicated to iconic Italian actress Anna Magnani. Award winning figure head of Italian Neo-Realism, unusual beauty, strong minded she was a woman of considerable strength and charisma, never mind talent. I can't possibly  know if the perfume would have suited her, but the image I have of her totally suits the perfume. She is a wonderful example of a passionate and confident woman who doesn't give a damn, whose laughter is smokey and a bit dirty and who does what she wants without any false pretence. Inspirations for perfumes don't come much better than that and while I thought for a while that calling it after her would have been a good idea, I'm not so sure anymore now, because after all: What's in a name anyway?

Have a look at this video showing Anna Magnani in Pier Paolo Pasolini's film
Mamma Roma from 1962.

How and where to wear it:

Inspired by the video, no doubt, I'd say: Late summer evening with friends and family, lots of wine, lots of laughter, lots of home made hearty food, at ease with yourself and the world
2 comments:
Labels: balmy, brown, chypre, floral, green, Italy, nobile 1942, orange, Perfume reviews, pink, red, vanilla, yellow

We didn't have much of a winter here in the UK, it basically rained, and then it rained a bit more, followed by some rain...But that doesn't mean that we're not super excited about the first signs of spring.
You can already see some weirdos in flip flops and shorts, the magnolias show the first blooms and the shops are in full Easter decoration frenzy with their happy go lucky depiction of spring in sugary pastels, bright yellows and fresh greens, sometimes verging on the psychedelic. Yes, those are the colours that come out in spring, but the season is so much more powerful and dramatic then fluffy bunnies and eiderdown chicks in teletubby land. It's about the reviving, mating, growing and reproduction, isn't it?

Although I'm not all that seasonal in my perfume wearing, the beginning of spring and autumn are both times when I am excited about change and this will manifest itself in my wardrobe and perfume choices. Right now I want something more green and floral, but I'm not yet ready for the full flower bouquet. And while I'm always happy to try out new fragrances, my main choices for this spring have been made. It's going to be Aedes de Venusta's signature scent of which I have a 10ml that will last me for a while and then I  simply have to buy a bottle of Gothic Bluebell by Union fragrances.
Why? Well, the Aedes has this delightful fresh sparkle of rhubarb that feels just right for the moment and the Bluebell is a veritable feast of hyacinth, violets and damp moss.


When you go walking in a British forest during the bluebell season you might stumble upon one of those incredible carpets of purple and blue, kissed by sunlight and flanked by the darkness of still bare trees. It's a truly memorable sight and so surreal in its unexpected beauty that you can imagine elves and fairies passing by at any moment. These little wild flowers produce an abundance of colour and scent and half of the world's bluebells can be found in the UK, so they're pretty much a national treasure. (Sadly under threat from the scentless but more robust Spanish bluebell plants).
Union fragrances is obviously a very patriotic British perfume house, celebrating the aromas of the British Isles in all their glory. Just look at their bottles:

The idea behind Union is to use as many homegrown ingredients as possible and recreate different aspects of the unique British flora. Their fragrances carry names like Holy Thistle, Celtic Fire and... Gothic Bluebell. A rather fitting name I find. I fell hard for its mysterious and sweet beauty, but I guess it's actually not that easy a perfume to love or like. Hyacinths and violets, used here to enhance the bluebell effect, are both notes that can be an required taste, suffering from being labelled old fashioned and granny-ish. This fragrance is certainly not very urban or contemporary, but I would call it ancient and Pagan rather than old. The innocent powdery notes associated with pastel colours are combined with a woody and animalistic accord that gives this sweet scent its darker woody aspect. Instead of taking the delicate floral notes on a road trip to modernity it decides not to bother with being cool and follows hidden and ancient paths where the trees are casting long and twisted shadows and the light is eerieand ethereal. I used this image as the inspiration for my colour interpretation which had to feature lots of purple, some white, a hint of green and a dark shadowy hue in the background. When I first wore Gothic Bluebell it immediately reminded me of Pre Raphaelite paintings - another very British affair - where danger always seems just a second away from all the twee-ness, the whimsy and the Kitsch. Beautiful women in medieval costumes brush their long hair whilst humming a simple melody and suddenly some brute jumps out at them and slits their throats....or something along these lines.

Gothic Bluebell has a powerful sillage and stays with me all day, although it doesn't change much, keeps its main notes until the end and fades out very gently. It's incredibly intoxicating and sexy in a refreshingly unsophisticated "Come and Shag me" sort of way. Sometimes beauty doesn't need much finesse but presence, and Gothic Bluebells certainly has that in abundance.

How and where to wear:

As Beltane has gone out of fashion a dozen centuries ago I suggest its modern day equivalent, the Internet dating. Wear it while composing your profile and feel irresistible.

This is a blog about perfumes and colours. I'm trying to illustrate my olfactory journeys with colourful postcards. I am by no means synesthetic, I just like to discover new perfumes and enjoy the visual way of describing them. The colours I chose are not meant to be accurate note descriptions, although sometimes a blood orange note translates into a lot of orange on the screen. I hope you will enjoy your time here and if you want to contact me please do so at sabine dot cornic at gmail dot com